Bangalore Metro Map - Which Metro Line is Most Convenient For You? 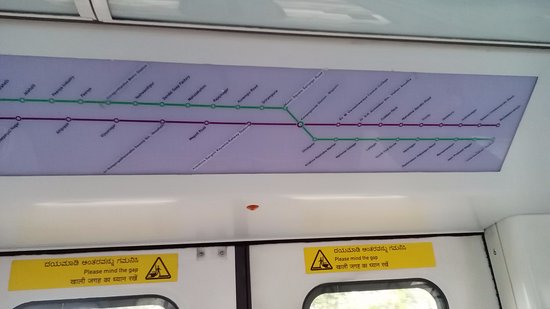 If you have just moved to Bangalore, you may not be familiar with the local metro maps. But, there are some tips you should keep in mind when you use them. Here, we will discuss the Green Line, Purple Line, Yellowline, and ORR Metro lines. The following are the locations of these lines, along with their frequencies. Read on to find out which one is most convenient for you. Once you have an idea of the location, you can begin exploring the city.

The green line is one of the future projects of the Bangalore metro. Initially, the plan was to extend the existing line to MG Road and the airport, but BMRCL missed several deadlines. However, in October 2017, the company finally opened the first phase of the Namma Metro, with the opening of the six-kilometre long green line from Yelachenahalli to the Silk Institute. Until that point, the city has seen a significant growth in the number of people who use public transport.

As of today, there are only two working lines in the Bengaluru metro system, the Purple line and the Green line. The Purple line runs from Mysore Road to Baiyyapanahili and takes around 36 minutes to travel from one end to the other. The Green line will run from Nagasandra to Yelechenahalli and will have 12 stations. The stations will be Chikpet, KR Market, Banashankari, Lalbagh, Jayanagar, and South End Circle.

The Green Line connects the northwest part of Bangalore with the southwest region. It runs through industrial areas and connects residential areas. There are 26 elevated stations along the way. Majestic station is an interchange station for the Green and Purple lines. The Namma Metro also has a four-km underground section. In addition to connecting residential areas with business districts, the Green Line will also make it easier to travel to the airport and other destinations.

The Green Line is the most recent addition to the metro network. It began operations in October 2011, connecting Baiyyappanahalli station in the east with the Mysore Road terminal station in the south-west. This line has 17 stations and 18.1 km of track, including four underground sections. It also runs through many prime areas of the city. The authority plans to extend the Purple Line by two more kilometers in the east and south to Challaghatta in 2022.

The PURPLE LINE metro is currently running between the two central business districts of the city, Mysore Road and Baiyappanahalli, and will be extended in both directions. The route is 18.1 km long, with 17 stations, with 4.8 km of underground section in the middle. The line will be extended to Kengeri in August 2021, and the authority plans to extend it by two km till Challaghatta in 2022.

The second line of the Bangalore metro is the Green Line, which opened in March 2014. It runs through the north-western and south-western parts of the city and includes 24 stations. It uses three-coach trains and travels at 65 km/h, with a headway of four to 15 minutes. It uses standard gauge 1435 mm rails, and the power source is 750 V DC via third rail. The Green Line also has a few interchange stations with the Yellow, Pink and Purple lines.

Phase ll of the Purple Line will begin commercial operations in August. Namma Metro has filed all of the necessary documents with the CMRS for safety inspection. Once the safety inspection is over, it can start commercial operations. The service will eventually extend to Mysuru Road. If the construction is completed by the end of August, the line will be completely operational between Kengeri and Baiyyyapanahalli.

The Bangalore Metro Rail Corporation Ltd (BMRCL) is on the verge of implementing its ambitious plan to expand the city's public transport system. The proposed ORR metro line would stretch along the Outer Ring Road (ORR) between KR Puram and the Central Silk Board. The company has split the project into two parts for faster construction. The first package attracted six bidders and the second package attracted eight. Bids were opened last Friday and BMRCL was pleased with the number of companies that participated in the process.

The ORR Metro line will be a part of the Namma metro project in Bangalore, Karnataka, India. It is the third phase of Namma Metro. It will be a double-line system with a central depot. The ORR line will have nine stations and a common depot. The exact color of the line has yet to be announced. However, it is expected to reach the airport by 2022 and connect all stations in the first phase.

BMRCL is constructing a 19-km elevated line on the ORR. The project has 13 metro stations, and construction is currently suspended near residential areas. The company has received special permission to carry construction materials during the day. However, the company's plans to extend the ORR line beyond the airport include suspending nighttime work in these areas. The city is facing a huge construction boom and the ORR Metro line is at an inflection point.

The Purple Line is one of the most ambitious plans for expanding the city's transit network. It will link Baiyyappanahalli in the east to the Mysore Road terminal in the south-west. This 18.1-km long line features 17 stations and is partly underground. It passes through some of the city's prime suburbs. In addition to the new line, a proposed extension of the Purple Line will connect with the existing RV Road-Bommasandra Metro.

The yellow line will be the most convenient one to travel on when you need to go to the city center. It will connect 16 locations: RV Road, Nagawara, BTM layout, Silk Board, HSR layout, Oxford college, Baspura road, Electronics City phase one and phase two, Hebbagodi, Bommasandra, and the future Orange Line. You can check its schedule and map by following the link below.

The metro is a great way to cut commute times. The stations are well-maintained and secure, and you can easily reach your destination in a few minutes. The two stations currently operating in Bangalore are the Yelachenahalli station and the new Nagasandra terminus. There are plans to build a fourth station, called the "Green Line," in the near future. There are also plans to add a fourth line, called the Red Line.

The main portion of the yellow line is scheduled to open by March 2023. A small section of the line from Bommasandra to Central Silk Board will open in March 2023, but will require additional time. The 148-km suburban metro line is scheduled for completion by 2026. The CM recently announced that civil works will soon start between Baiyappanahalli and Chikkabanavara. RIDC has already floated tenders for the project's Chikkabanavara corridor.

The first line of the metro system, the Blue Line, opened in March 2011. This line connects the north-eastern part of Bangalore with the south-west. It runs along a 24.4-km route with 24 stations. The train operates with three-coach trains with maximum speeds of 65 km/h. The train operates at a headway of four to fifteen minutes. It uses standard gauge (1435 mm) and 750 V DC via third rail.

The Central Silk Board interchange on the Bangalore metro map was supposed to be built on a stretch from Ragigudda to Silk Board within two and a half years. The project was expected to significantly reduce the travel time of motorists, as it currently takes around 20 minutes to cross this junction. In addition, the elevated road would offer direct access to the Electronic City, BTM Layout, Marathahalli, and HSR Layout.

In March 2014, the Bengaluru Metro opened its first green line, which runs between Nagasandra in the north-west and Anjanapura in the south-west. There are 30 stations on the line, with four of the stops elevated. Three stations are underground. The Namma Metro plan includes two more lines, the Orange line and the Red line, which will be added to the city's metro network in the near future.

Currently, there are several proposals for a new line connecting Silk Board and KR Puram. Phase two of the project consists of an elevated line between Silk Board and KR Puram, and would have 13 stations. This line is called the ORR Metro Line, and it will also connect with the proposed RV Road - Bommasandra line. Hopefully, the new line will help reduce traffic in South Bengaluru and make the journey more convenient for office goers.

A new line is planned to connect the two airports. The planned extension of the Bangalore Metro will run to Kempegowda International Airport, which could become the startup capital of the world. But despite the promise of the new extension, the Bangalore Metro has been a slow progress, with a series of road and land acquisition issues, tree felling, and financial crises faced by some contractors. In addition, the recent Coronavirus pandemic has halted progress on the project.