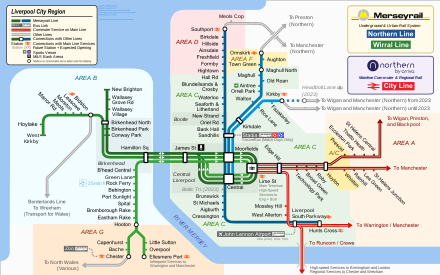 The Arriva Merseyrail network rebrands itself as Arriva Trains Merseyside. Merseyrail trains travel up to 20 miles without recharging and are available on three main routes. Train departure times are kept to one or two minutes. The journey planner below gives you an overview of the price of your journey and ticket options. Once you've selected your journey, you'll see a list of trains departing from your current location and how long it will take you.

Merseyrail trains can travel up to 20 miles without recharging

New battery-powered trains are on the way to Merseyrail. The testing phase has been a success, with trains running as far as Speke, Kirkby Town Centre, Southport Town Centre, Wirral Waters, and Knowledge Quarter. The trials, financed by the Transforming Cities fund, have tested a new class 777 electric train with battery technology. The trains exceeded expectations by being able to travel up to 20 miles without the need for a recharge. The new trains could operate beyond the existing third-rail network without having to make major investments in track infrastructure.

The new fleet of electric trains will be introduced later this year, with the first ones arriving in summer 2019. They are expected to run as much as twenty miles before recharging, which will help reduce the need for regular recharging. New trains are also expected to be much more fuel-efficient than older trains. The new trains will last longer, lasting as long as eight hours without a charge.

A new technology called driver-controlled operation is also part of the programme. In addition to making the new trains more accessible, the trains will have a narrow 25mm tolerance on platforms. This new technology will be fitted on the lower body side of the train, and will create a barrier between the train and the platform. This will prevent passengers from falling off the train, which could lead to accidents.

The arrival of a new name for Arriva's local railway network has caused some confusion. The new name is based on its location in Liverpool, where the network was originally named Arriva Trains Merseyside. A new logo will also be unveiled on the Arriva website. The company's German operations will be rebranded as Netinera.

When Regional Railways took over the operation of the Merseyrail network in 1993, it painted its stock in yellow. This livery featured white around the doors, a thick black stripe, and the Merseyrail logo was placed where it had been before. When Arriva Trains Merseyside rebranded its network as Arriva Merseyrail in 1998, the new brand included white logos on the bodysides, removing the black stripe.

The company also changed the brand name of the bus services in the region. Previously, Merseybus' bus services operated in Huyton and Southport. However, when MTL purchased Gemsam Holdings, it maintained the Liverbus livery and transferred ex-MTL Leyland Nationals to replace aging Atlanteans. The company adopted the new MTL North fleetname in 1996. In the same year, Arriva took over the Huyton depot, and transferred routes to its network.

The Northern Line is the route that is operated by Merseyrail. The route is denoted by a blue wordmark on the underground stations. Trains on this line operate every 15 minutes on weekdays and every 30 minutes on weekends. The train services are electrified and run from before 6am until midnight. Additional trains run during peak times. However, passengers should expect a period of disruption, so it's important to plan your journey accordingly.

The Merseyrail system is composed of 67 stations and seventy-five miles of track. Of these, about 6.5 miles are underground. The network carries an average of 110,000 passengers every weekday and carries an average of 34 million passengers a year. The trains are operated by a joint venture between Serco and Abellio. The railway company took over the franchise from Arriva Trains Merseyside in 2003. There are currently 59 trains on Merseyrail's network, and they are operated by about 1,200 people.

Merseyrail operates two electrified lines between Manchester and Liverpool, as well as two suburban services. The trains on the Northern Line run every 15 minutes, while those on the Wirral and City Lines run every few minutes. These frequent services provide passengers with great flexibility when booking their train tickets. The train services are also referred to as City Line, although they are not electrified. In addition to the main routes, Merseyrail also has several suburban services that serve Liverpool and Chester.

Train departure times are kept to 1 or 2 minutes

Merseyrail's journey planner shows departure times within one or two minutes. It keeps these updates to a minimum due to national timetable changes. However, most of the departure times will not change. You can find the latest departure times below, along with ticket prices and times. The timetable for the current day is available in the Merseyrail website. You can also check out other information on the journey planner, including how much the ticket will cost, as well as any special information such as a wheelchair accessible bus service.

As the strike action has continued, the train timetable has been affected. The service will not operate on Thursday 23 June, Friday 25 June or Saturday 26 June, with knock-on effects the day after the strike. However, limited rail replacement buses will be available until 07:00 on Wednesday 22 and Friday 24 June. Trains will reintroduce from 0700 on those days.

Stations on the network

The Merseyrail network is a regional rail service that operates in Liverpool, England. The system has 68 stations across Merseyside. Four underground stations in Liverpool city centre connect to other parts of the region, including Chester, Wirral, and Southport. Trains run every 15-30 minutes. For more information about stations and train times, check out the Merseyrail website.

The Merseyrail network is primarily signalled from the Sandhills Integrated Electronic Control Centre (IECC), which is located near Sandhills station. It controls the Solid State Interlocking and Remote Relay Interlocking at Sandhills. The IECC has two signalling positions, two CCTV crossing keeper positions, and an electric control operator for DC traction supply. In the future, the network will use trackless trams to connect the city's major train stations.

Long distance routes would concentrate at the Lime Street interchange station, which serves the Liverpool South Parkway and the Wirral. It is also served by the City Line at Lime Street and the Northern and City Line at Hunts Cross. In addition to these long-distance routes, Merseyrail also operates local trains. In addition to Merseyrail trains, the network also has buses.

An electrified line from Liverpool Central High Level to the city's south parkway station is still on the table as of today. However, the city is working on various transport plans and a number of problems. During the late 1960s, the Transport Act of 1968 was being implemented and Liverpool was developing its transport strategy. The city wanted to electrify its rail system to make the city more accessible to commuters, and this plan was designed to use the existing railways and achieve two major outcomes.

In 1934, the LMS installed modern colour light signalling on the Electrified line from Liverpool Central High-Level to Gateacre. In 1938, the LMS started running trains to New Brighton and West Kirby from the station. In 1941, the CLC laid on extra trains between Liverpool Central and Southport Lord Street. This was only temporary, and the service reverted to a less frequent pattern after the war.

Plans to extend the network beyond the current Merseyrail route

Liverpool City Region's rail services are set to expand beyond the existing routes as plans for new stations and trains have been revealed. With new trains running on battery power, Merseyrail could soon offer a direct service from Preston to Wrexham and beyond. The network could also be expanded beyond current stations, such as Headbolt Lane in Kirkby. In addition, a future expansion could include a link between the Liverpool John Lennon Airport and the Knowledge Quarter in Manchester.

New Merseyrail trains will have a more spacious saloon and additional space for wheelchair users and prams. There will be a mix of seating types, with some'social' seats remaining. Platforms are being upgraded to make room for the new trains, while sliding step technology will make getting on and off the train easier for those with mobility issues. At this stage, there is no timeline set for extending the network, although it is possible.